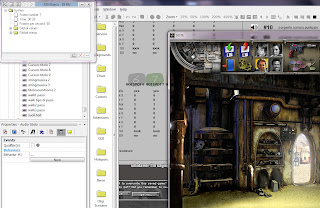 Upscaling the game to the shiny 1280*720 had a cost that became evident very soon: the GUI (Graphic User Interface, for the anti-nerds), designed for the 640*480, couldn't be used any longer. So, instead of trying to stretch it, basically doublesizing it (you can figure out the awful result we would had got) I've taken a more radical approach. 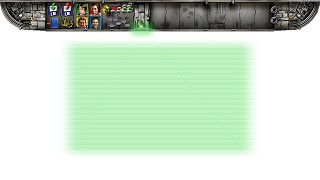 I've redesigned it completely, taking advantage from the higher resolution to get better graphics and even some additional functions. One in particular -the map- was conceived years ago but never actually inserted into the game. It's meant to help the player to keep track of visited places and possibly to let you teleport there skipping long walks. 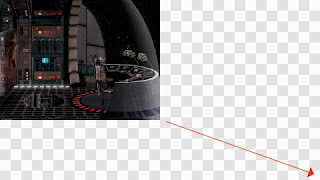 A new beginning for SOTE

SOTE is ALIVE. Just to let you know some news... The Adventure Game Studio, whom we've joyfully used since 2004's Tech Demo, has been discarded. Our team coordination problems, the time-consuming job of our programmer and the actual difficulty of programming on a tool that requires advanced scripting skills, making it impossible to replace our code man, have pushed us to leave AGS and start using a more flexible, easier to use and more powerful program, not conceived for point'n click graphic adventures but for any type of multimedia application: ClickTeam's Multimedia Fusion 2.

It's powerful, it's totally customizable, easy to use (even a non-programmer can use it) and it's capable of any type of hardware acceleration effect (multiple layers, parallax, alpha blending, pixel shaders, etc.).
SOTE's new engine is now under development, but we're not starting from scratch, since all our stuff is gonna be reused in a new authoring context. Dusk is determined to complete the code implementation of our stopped chapter, Hunting the Hunter, on Adventure Game Studio, but its' clear that Multimedia Fusion 2 represents the future of SOTE which Boba Fonts will create going on with the rest of the story.
That's the best way to make SOTE more beautiful visually and to accelerate its completion.