Here's a little teaser of what you can expect in terms of gameplay and pace. The video below doesn't show the new engine we're working at, but the OLD one, it's the old Prologue of Part I, Hunting the Hunter, back from 2008. As you can see the resolution was still 640x480 and it was programmed with Adventure Game Studio. Now it's getting bigger and better, but the pace and the feeling remain the same. 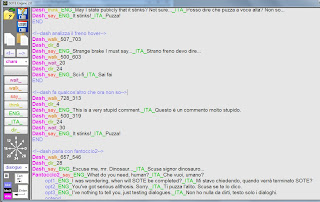